January 20, 2018
Ok, so we all know Mark Zuckerberg's Story from the movie "The Social Network". Before he launched Facebook he and his roommates built a site called FaceMash, which basically was about voting between college students on one another's hotness level. This soon turned viral and that's when he started thinking about building Facebook.

Being fascinated by his story I wanted to build something similar to Facemash as well, wanting to seeing what reactions it would cause on my friends. It wasn't that simple though as I wasn't planning to take 200+ individual pictures of internet people. Two reasons for that: 1) I am way to lazy to do such things and 2) I wanted to automate a process performing this action.

This idea came to my mind about two years ago, but at that time I didn't know how to write PHP or use APIs or do anything automated. This couple months, from October till now I've learned to use APIs of the four largest social networks: Twitter, Instagram, Tumblr and Facebook. Since most of my friends have an Instagram account I decided to use their Instagram Pics for my program. But how was I supposed to do that? I knew this was achievable but Instagram tries to block robots from accessing its contents. After reading a lot other people's code on github and testing server responses for several weeks

I was finally able to get the profile pictures of different people. Since I wanted this to be for my school, I went to the instagram page of my school and got all its following/followers. Then stored these into my database.. It took about three hours to make this, since I had to figure out what to add to them, such as a score value and connections between username and profile picture etc.

At about 1 AM that night, I started working on the design and the final page looked like this. 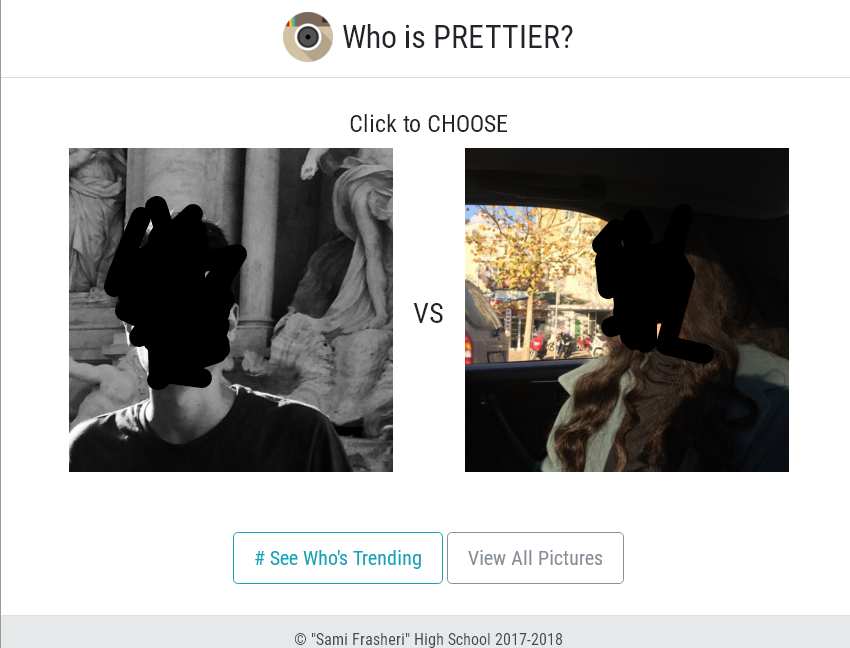 I posted it in one of my WhatsApp Groups just to ask the guys there about an opinion on how they found this. At first nobody was quite surprised about the contents until they found a picture of themselves or somebody they knew. I explained to them that I used some of their pictures to build the site, wanting to get some feedback whether to leave the page online or remove it. The people on that WA group were fine with it, so they didn't mind. They actually found it quite funny. Pleased I went to sleep that night.

The other day I had homework to do so I wasn't paying much attention to my newly launched product. This was until I checked my phone on the afternoon to see hundreds of whatsapp and sms messages. There were many people arguing about the page, finding it inacceptable having their pictures posted on a page they didn't know about, voted based on their appearance. Many found it not cool and asked ("threatened") me to remove their picture or delete the page completely.

On that day I had a lot of things going on, so I had no time to waste with these guys. I just changed the url, because I didn't know the link went so viral. With that ends the story of my Version of Facemash.
Was it fun to build? No.
Was it easy to build? No.
Was it useful? Sort of. I improved my skills in PHP, but the product itself wasn't. Still, most didn't like me.
Did it have any positive impact? Yes, because I got famous and there were many more people who knew who I was.
Will I do something similar in the future? Definitely no.

I'd like to show the project to you but I already removed it so... Thanks for reading.

Popular posts from this blog

How it works? I used an interval that repeats an algorithm for about 30 miliseconds. The algorithm spawns the point-planets with the position (random(0, canvas.width / 2) , canvas.height / 2) and a starting point towards the bottom of the canvas.

To make the orbits circular I set this force equal to circular force F = Mass * Speed / distance;
Through that I could define the starting speed of each planet.

If you want to see some weird planet orbits try changing the parameters of the browser window on your desktop or by rotating the phone screen if you're on mobile. This weird move…
Post a Comment
Read more

January 01, 2018
View Project
Made with pure JavaScript, HTML and CSS. No external libraries used. Not mobile-friendly yet. GraphMaker.tk is a light weight web framework that can be used to draw mathematical functions on screen real time, allowing the user to understand and experiment with the behaviour of different functions in 2D space.


It is fast, reliable and easy to use. If you have found it hard to use, scroll down this page and you find the section on how to use this web application.
How it worksThe way this works is simple and easy to explain, even though the entire project might look like a giant hard-to-make software program.
Everything begins with the converting of functions from user input into JavaScript legit functions using the Function(); Object.
All the functions are added in a huge array of functions that are all going to be drawn at the same time in the canvas.
Then another part of the program converts the values entered and received from the user-defined functions into canvas (x,y) coo…
Post a Comment
Read more